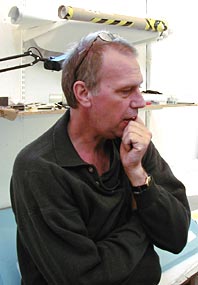 Studied 1974-79 at the College of Fine Arts in Stockholm. Since the end of the 70´s he has had a number of exhibitions in Sweden and abroad, including the Museum of Moder Art in Stockholm, Rooseum in Malmö, Galleri Riis in Oslo. In 1988 Rolf Hansson represented Sweden at the Venice Biennale. He is represented in the Museum of Modern Art in Stockholm, The Gothenburg Museum of Art, Fredrik Roos Nordic Collection at Rooseum in Malmö, Museum of Contemporary Art in Oslo and the Museum of Contemporary Art in Helsinki among others. In 1982 Rolf Hansson was awarded the PS 1 award. "He who does not feel as if he has created nature himself when he sits before it should not hold a paintbrush. "So wrote a youmg Leonardo da Vinci - and even if today´s world is different from that of the 16th century, his theory does not lack relevance. A painting is still - a painting. Rolf Hansson is a painter. With rare intensity and compelling technique he creates paintings so suggestive that one is almost sucked into the layers of colour. However, it seems to be neither traditional representation nor modernistic abstraction. So what is the "nature" he creates? As an observer one is put in the presence of constant transpositions and dislocated perspectives. The paintings can appear both as physical and mental landscapes, like satellite pictures of the eart´s crust - or as extreme close-ups of one of life´s and the earth´s constnatly pulsating movements. Is one not tempted to reflect om one´s nature as well as one´s culture? And the relationship between them both?"

Extract from text by Jan Aman